As if the ASNE Reynolds High School Journalism Institute hadn't given us enough, Gregory Favre and Alan Weintraut counseled our group Friday to prepare for the return home so that we might continue our noble mission beyond the June 29 exit. Favre said we should recognize that journalists, our students, will need a little more care and he referenced the emotionally charged events of Hurricane Katrina and September 11. As an example of high school journalists facing the trials of covering sensitive events, Alan shared the story of a young Annandale High School editor's courageous coverage of a freshman student's suicide. He said she had an experience she would never forget, and I know that is true.

I shared with several of you that I covered an on-campus suicide while police beat reporter for The Daily Skiff at Texas Christian University. I had met the young man when he studied computer programming with my roommate. I imagined his face when I read the police report. His mother and brother candidly told me his story of consuming depression, and cried about their loss as I asked them to describe him over the phone. When I hung up the phone, I sat at my editor's desk and wept. To the editor's credit, he did speak to me after I had filed my story. He said that he believed I was best to cover the story because of my sensitivity. I'm not sure I believed that, though. When the prospect of covering such a story left me with anxiety at the beginning of every day, an insightful professor advised me to consider other options. With that climactic event, I made a decision to avoid a profession in newspaper journalism. I hadn't been trained for any other kind, and in Dallas/Fort Worth, publication options outside of the newspaper aren't prevalent.

Since 1999, I've consumed news and advocated for journalists, but as an admiring outsider. I exiled myself from the world of journalism, no one did it to me. I believed my days as a journalism insider should end because my sensitivity would make me a less-than journalist, and the idea of that was unacceptable to me. I could only pursue a career field where I might be above average or truly great. I believed that my emotions would make me a biased, weaker journalist and that in some ways the best reporters and writers could switch off their humanity. 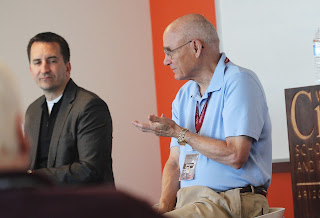 Favre said, "I never believed as a journalist that I left my humanity at the door." He said he looked for journalists who had both talent and heart. "Make me care. Make all of us who read those stories care," he said.

So, you're saying that caring makes me a better journalist? With his words, Favre solidified my invitation back into a world I so admired. ASNE and Steve Elliott had issued the invitation, but I didn't truly feel worthy of it until Favre said those words. Some of you have wondered why this experience has been so emotional for me, and now you have your answer. I've loved teaching, and I know I was born to teach, but I never felt right about entirely leaving journalism. Now, I merge my two loves. The Cronkite program showed me that journalists today must be many things, and I love the creativity journalism demands and the options that new journalism allows for those who may not fit into that somewhat limiting hardened newspaper reporter role. I have been finding my way out of exile these past two weeks, with you as my sherpas. You've helped me feel included, supported and cherished for all that I am, especially someone who cares.

Journalism educators from around the country will travel to Arizona State University's Walter Cronkite School of Journalism and Mass Communication in June 2012 for the ASNE Reynolds High School Journalism Institute.